It’s rhubarb season, and I’m sharing my favorite rhubarb cake recipe I’ve had to date. This rhubarb recipe is a cake dessert bar and has a shortbread cookie-like crust layer and a cheesecake layer, all topped with deliciously tart rhubarb. It’s a coffee cake cheesecake rhubarb cake! 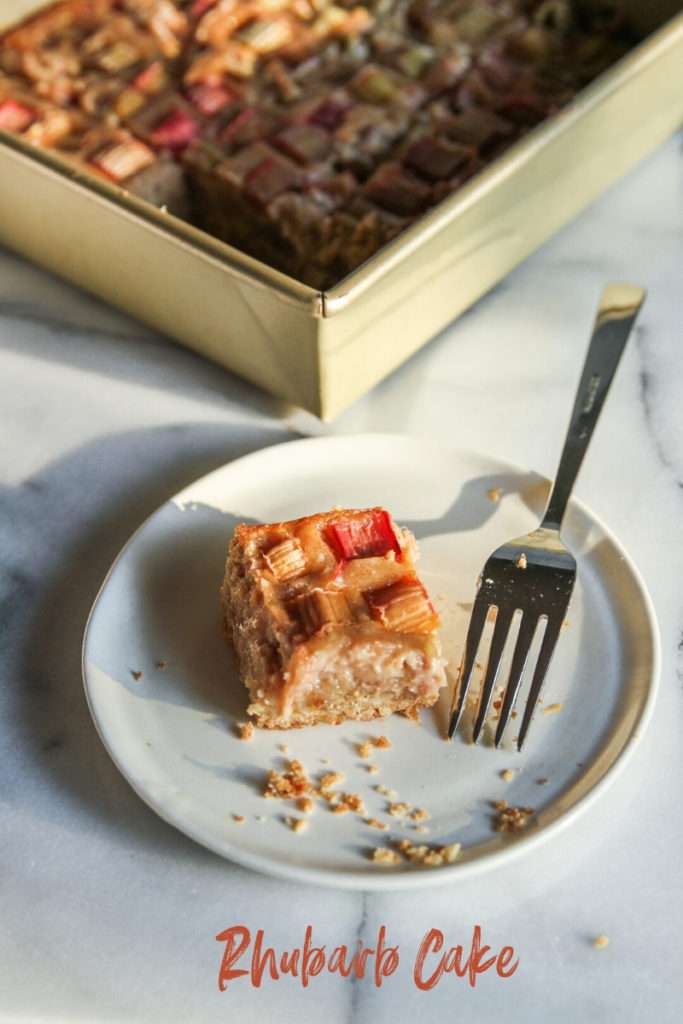 I am all about easy dessert recipes that have multiple layers apparently – like when I shared this carrot cake coffee cake which has a carrot cake layer, a cheesecake layer, and a crumb layer. Baked together for one delicious slice. 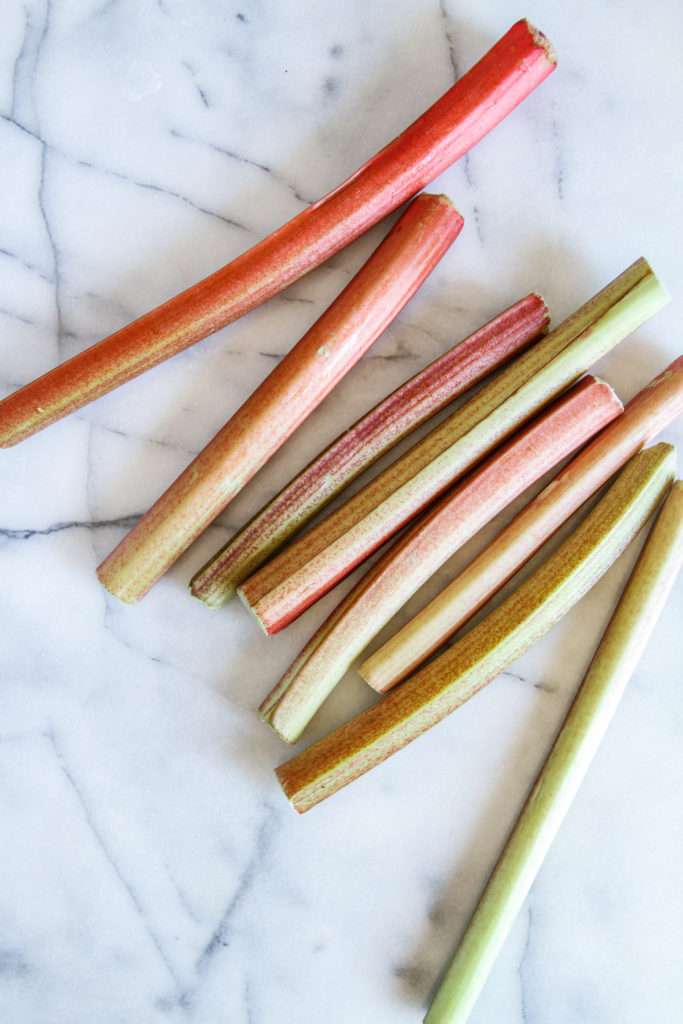 Many rhubarb recipes I have seen only have like 1 or 2 stalks of rhubarb, but I wanted a rhubarb forward cake, so this cake has a whole bunch of rhubarb (6-7 stalks, about 3-4 cups!) but you can use more or less depending on how much rhubarb you have. 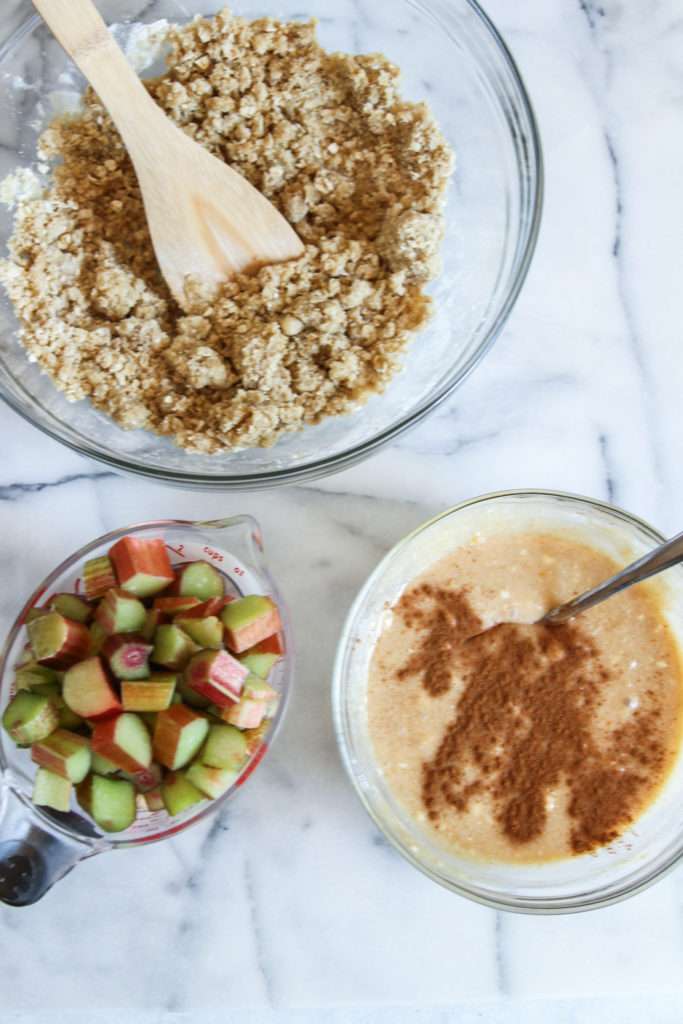 This rhubarb cake recipe is a slight adaption and combination of the rhubarb sour cream coffee cake from Taste of Home and the Taste of Home rhubarb cheesecake squares recipes I came across. I was looking for easy rhubarb cheesecake recipe, and these just spoke to me. I made it slightly differently and used cream cheese instead of sour cream. I’ve since tried this recipe with Greek yogurt and rhubarb cake with Greek yogurt is delish!! So, you can choose to use cream cheese, sour cream, or Greek yogurt in this recipe. 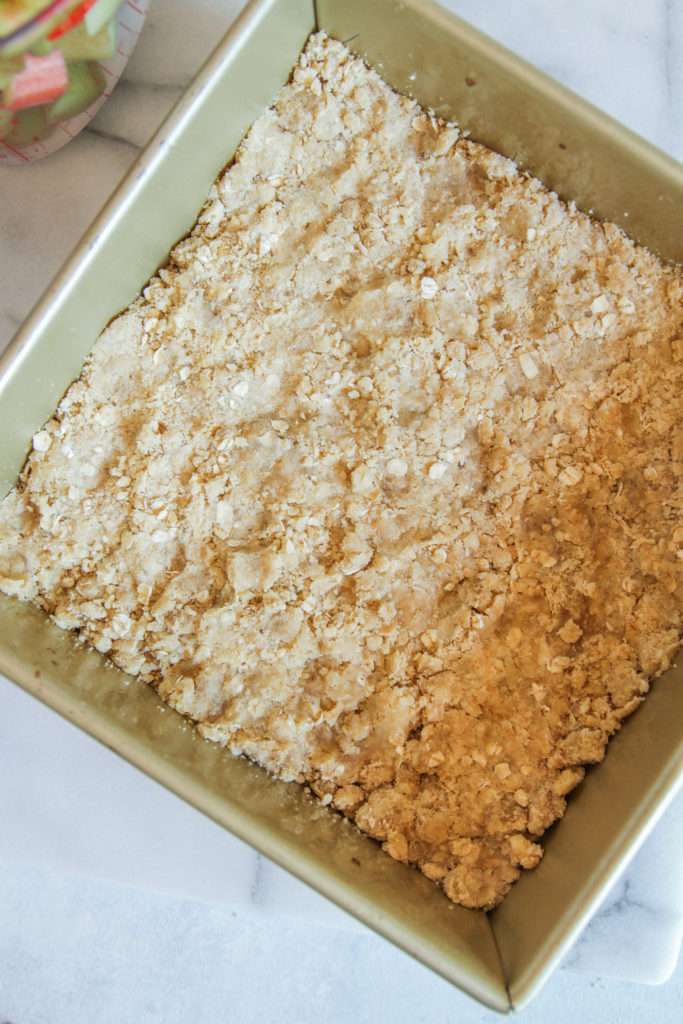 If you’re eating it day-of, you can totally make the crust, and then pour the cheesecake layer on top, and then beautifully arrange the rhubarb pieces on top. But if you’re planning on having it for the next day or any days to follow, I’d recommend mixing the rhubarb in and using a 1/4 of the cookie crust layer on top (that’s how I’ve written the recipe.) The reason I recommend this over the beautiful rhubarb design is that after a day or so, rhubarb does tend to discolor a little. There’s nothing wrong with the cake and it still tastes delicious, it’s just not as pretty.

As in my real life, a million interruptions happened when I was trying to take photos of this cake, so the final photo ended up being super shadowy because it was after the kids went to bed. I actually love the moody look! 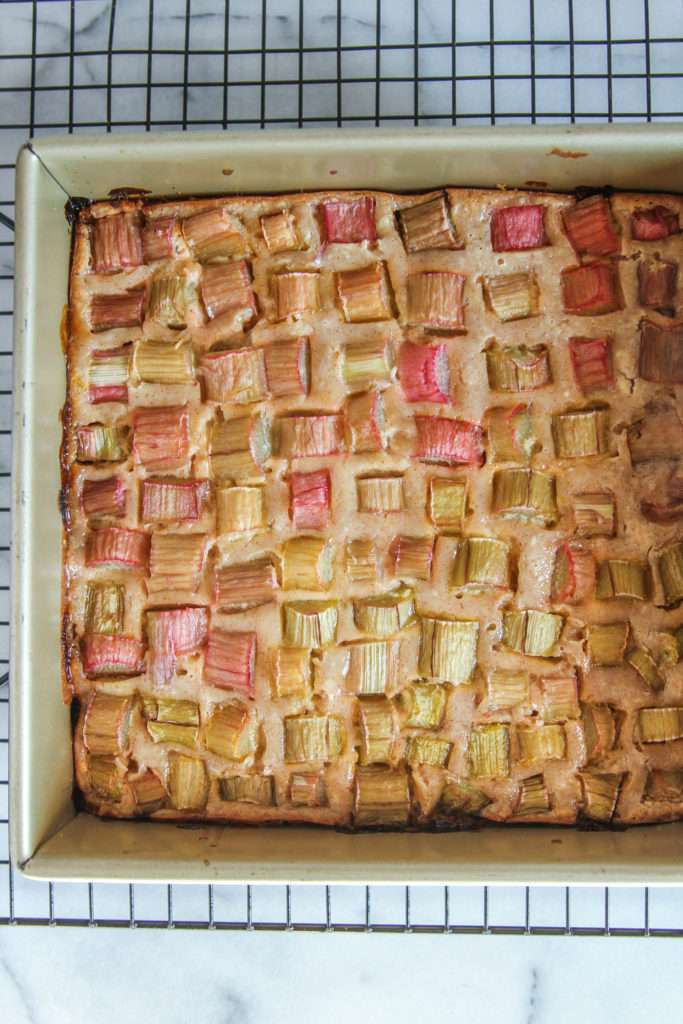 Next time you’re looking for a rhubarb cake recipe, look no further and make this recipe!! 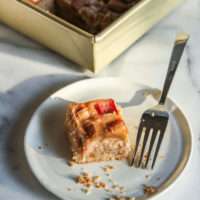 *or you could use all the crumble mixture at the bottom and do a cheesecake layer on top as I did in the pictures, but the topping on top and the rhubarb mixed in is how I'd recommend baking it if not going to eat it all the same day (it looks better the next day with this method). Recipe from Taste of Home for rhubarb cheesecake squares