Three friends went on a road trip to Louisville, KY over the July 4th weekend…and they remained friends {or so I think, lol}!

So over the holiday weekend my husband and I and one of our friends (and of course our dog, Clover) took a lovely road trip from Milwaukee – to Louisville with a quick stop to pick up said friend in Chicago. 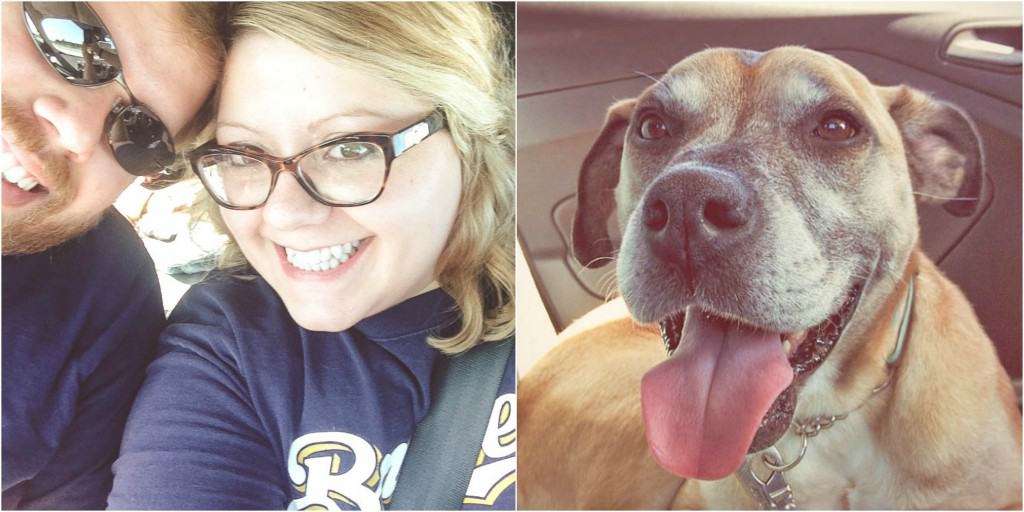 The trip started off smooth sailing with no traffic, then we hit a bad traffic patch in Indiana and were stuck for 2 hours…stop…go…stop…go…so we were really ready to get to the house we had rented.

Speaking of the house, how absolutely adorable is the Quaint Artsy Bungalow we stayed at? We found it listed on Airbnb.com (we’ve had such great luck with both vrbo.com – vacation rental by owner – and airbnb – both sites you can rent out homes or apartments). The owners of the home even left a super cute ‘welcome’ basket that had a list of their favorite restaurants in it. 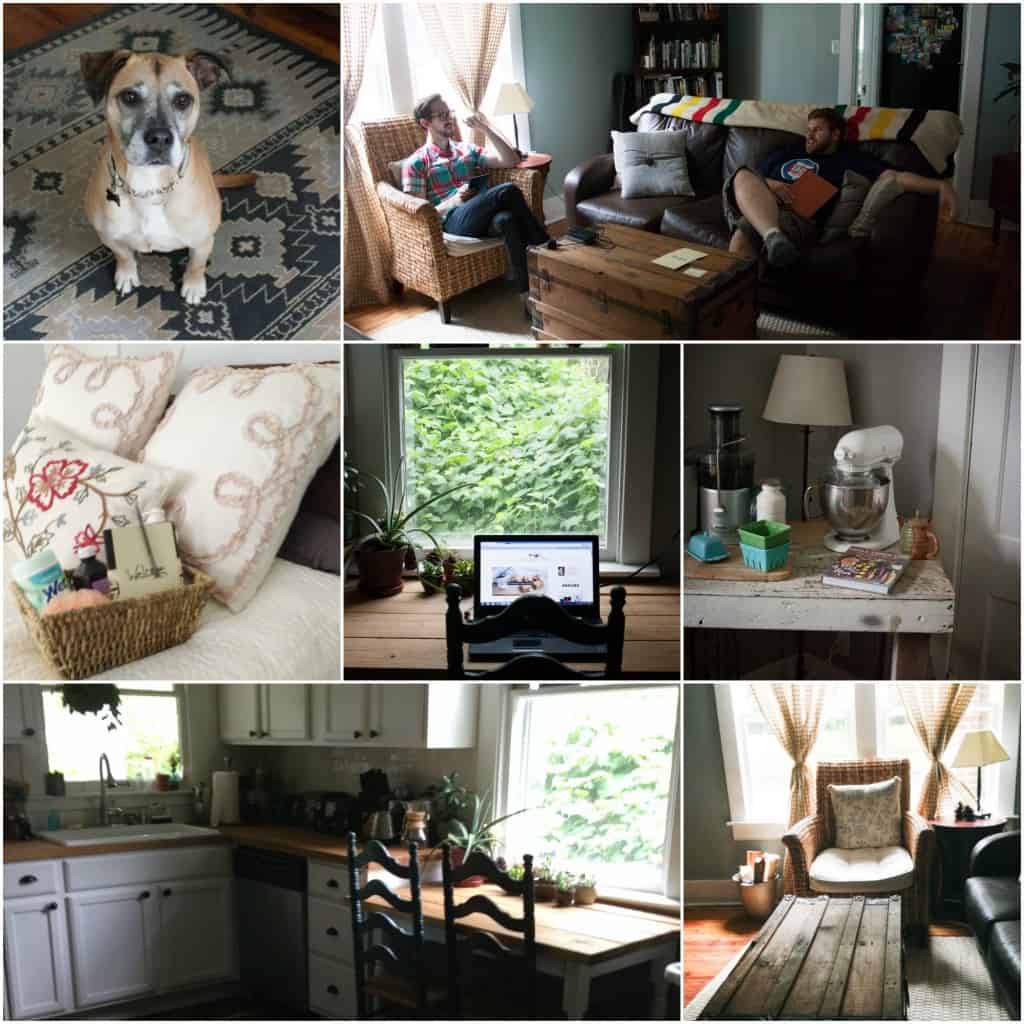 After we got settled, we went to the Silver Dollar restaurant where we had some of the BEST FOOD and DRINKS ever! Their Fried Pickles had this coating that didn’t slide off and their chicken and waffle…omg, to.die.for! So good!! It wasn’t too fancy, but had the most amazing flavors. 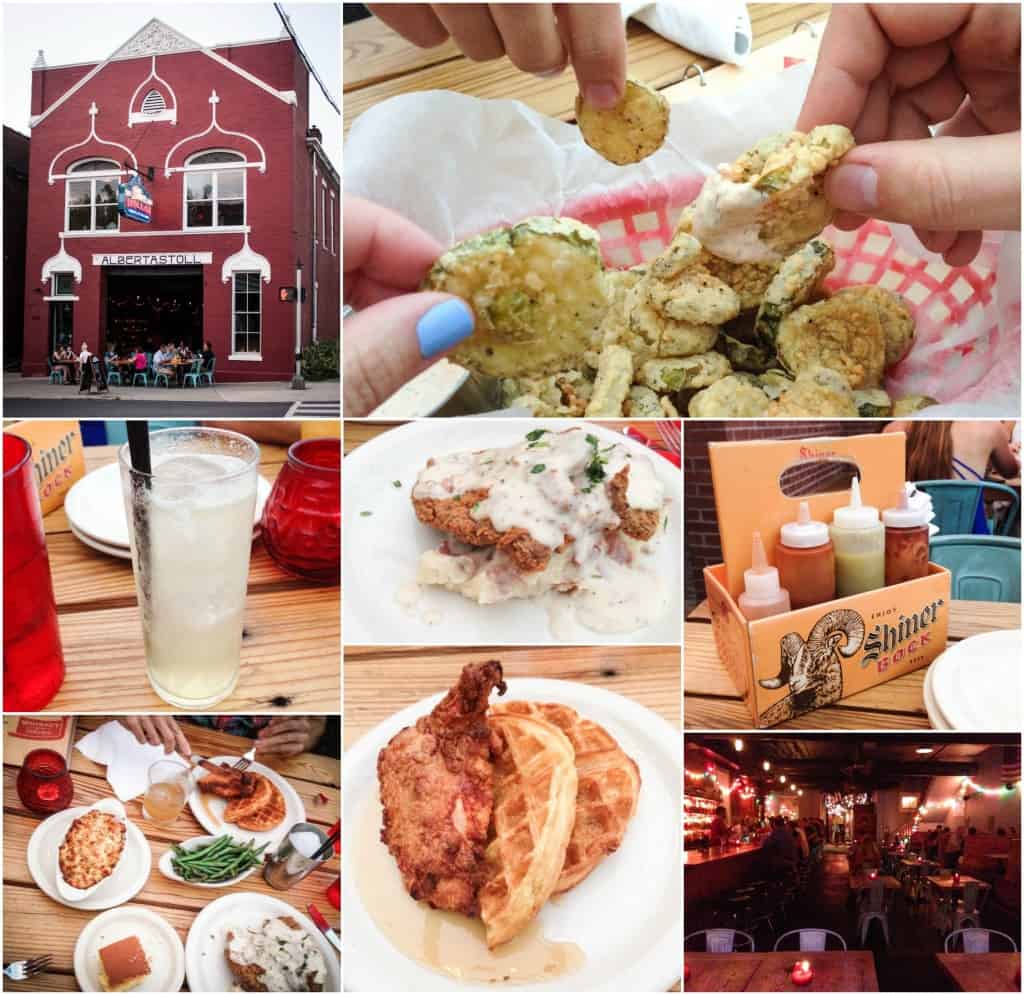 The next day we started off with homemade biscuit sandwiches from the Gralehaus and then drove to Bardstown to visit and tour the Barton 1792 Distillery. 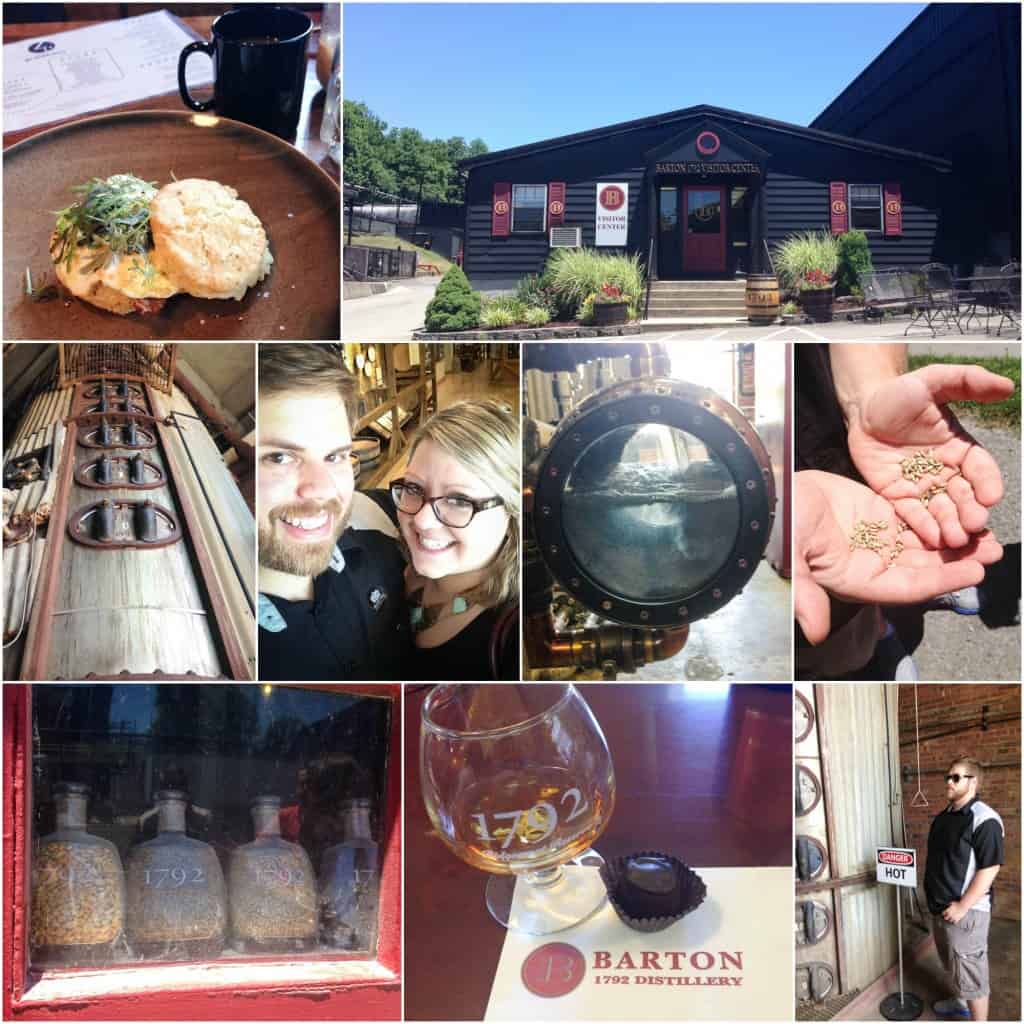 You’ll have to excuse the ‘Danger Hot’ picture, it was just too cute not to include lol! I’m not that into Bourbon, but I definitely like the chocolate that we were served with each tasting! After visiting Barton 1792 (which was our favorite tour by far because it was so in depth and informative) we headed over to Heaven Hill Distilleries. Heaven Hill was big and showed a lot less, but had some really great informative displays to view. 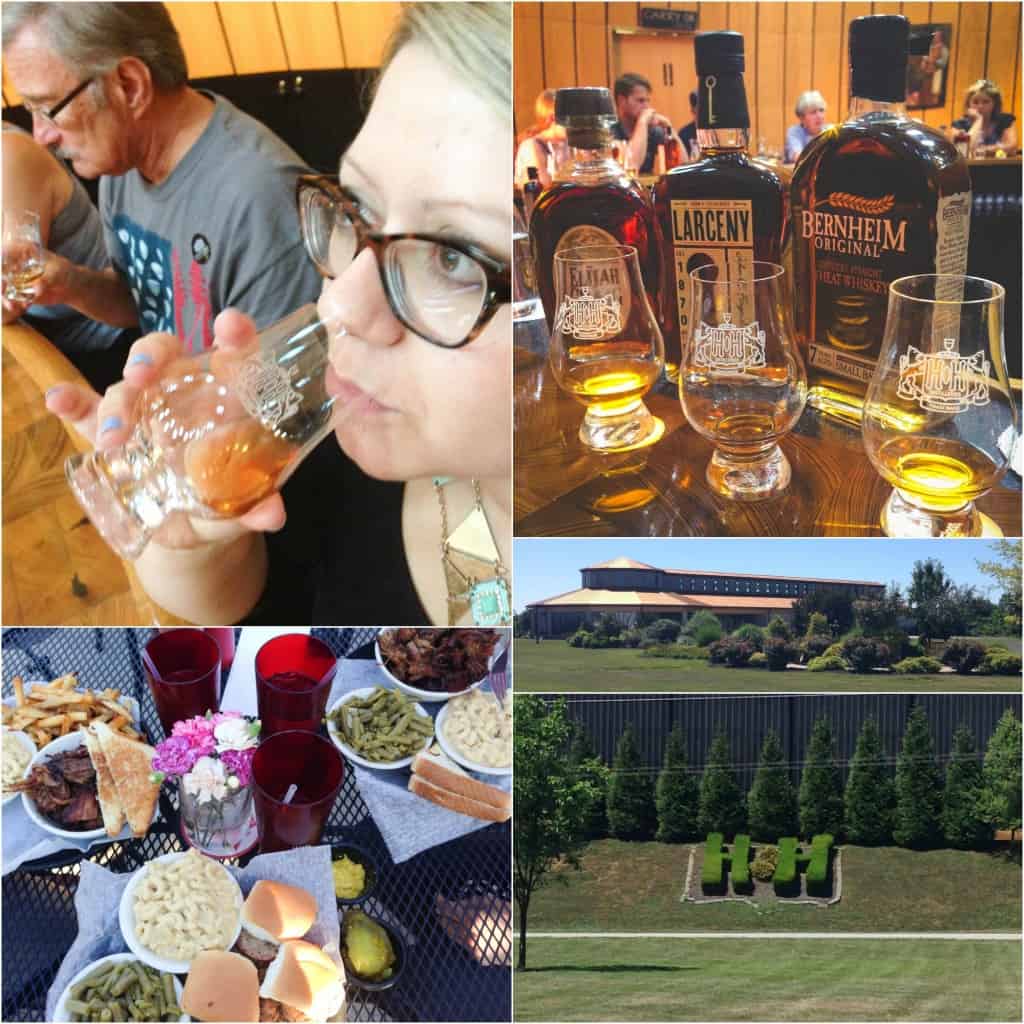 Heaven hill was super fancy, they even had HH bushes. After the distillery we headed back to Louisville and  had dinner at Momma’s Mustard, Pickles, and BBQ. OMG you guys, the food was so good! They had a menu item called ‘burnt ends’ that were heavenly, and their sliders were insanely good. Oh yeah, and the pickles and mustard were good!! I have a serious love for mustard …and pickles, so I don’t think this place could have done wrong! So good! I want to go back and eat there again!

So you’d think we’d have been in a food coma after the delicious BBQ right? Wrong…we went to The Comfy Cow for some small batch ice cream. Ok, I would frequent this place just for the decor-just look at their stools…they also had cow hoof prints on the floor and chandeliers where each light bulb was coming out of an ice cream sundae!

The next we started out at Hillbilly Tea for breakfast. This place was very interesting, maybe too ‘hipster’ for me…I mean, I try to be cool you guys, I try! To start, the menus were all printed on cloth making them virtually impossible to read, luckily Nick was super helpful and read the entire menu to us. I took a picture of Nick’s breakfast because I don’t know what I ordered with a fancy name that equated to a plate full off scrambled eggs and a piece of fruit on the side (Nick kindly gave me half his piece of toast to eat the eggs with, doesn’t his look good though). Their decor in the bathroom just made me lol, I had to take a picture of it to share. How does one not bump into that giant chair? And why is there a giant chair next to the toilet? 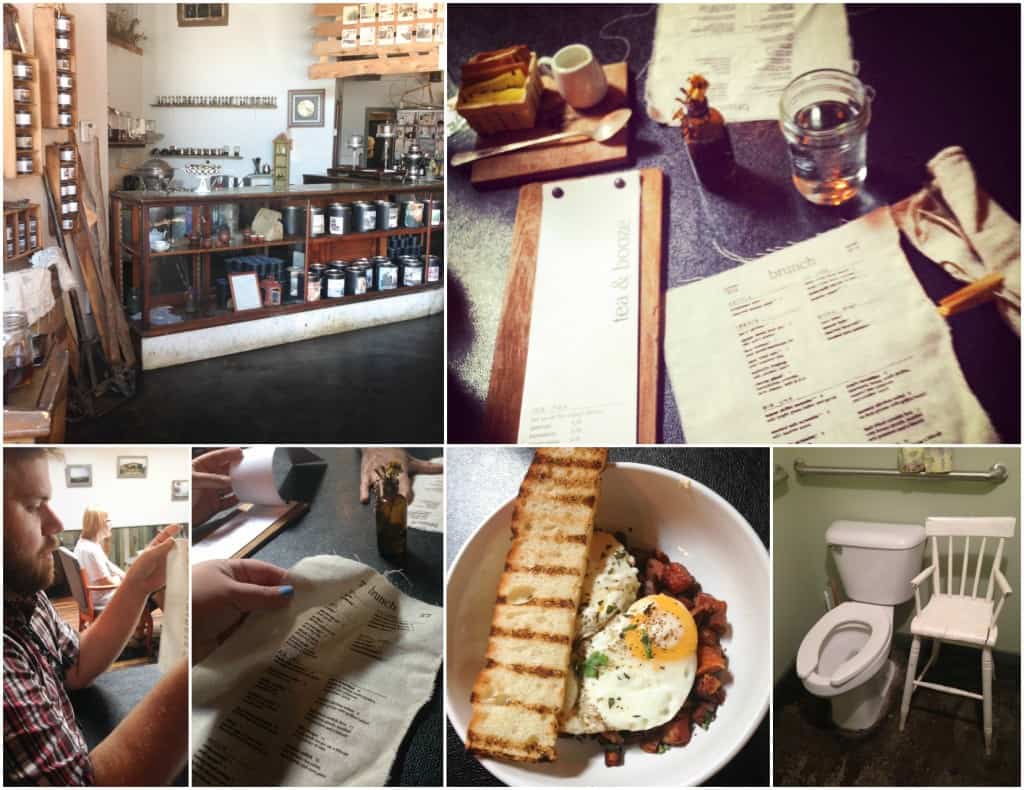 After breakfast we went to the Louisville Slugger Museum and Factory. This was quite fun…one funny thing is that after the tour the boys decided to go to the batting cages…it was them, and then a bunch of 10 year olds…truly made me laugh, but they had fun!

So after the Slugger Museum and Factory we went to somewhere that had been on my list – Art Eatables -oh and Nick took this funny pic of me planning our day. 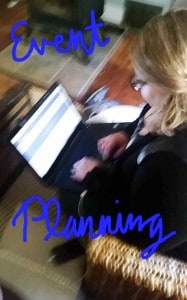 Art Eatables makes small batch bourbon truffles, and since it was hot, we (read I) didn’t want them to melt, so we just HAD to finish off the box…only option, right? Each and every one was delicious, and you can see some sharing going on.

Then we headed over to the Evan Williams’ Bourbon Experience which was let by the best tour guide ever, then had dinner at the Holy Grale which is in a renovated church and surprisingly (at least to us) shares a beer garden with the place we had breakfast, The Grale Hause! We finished the evening by having Chess Pie and ice cream from The Pie Kitchen (I tried the Chocolate Chess Pie…delish!) 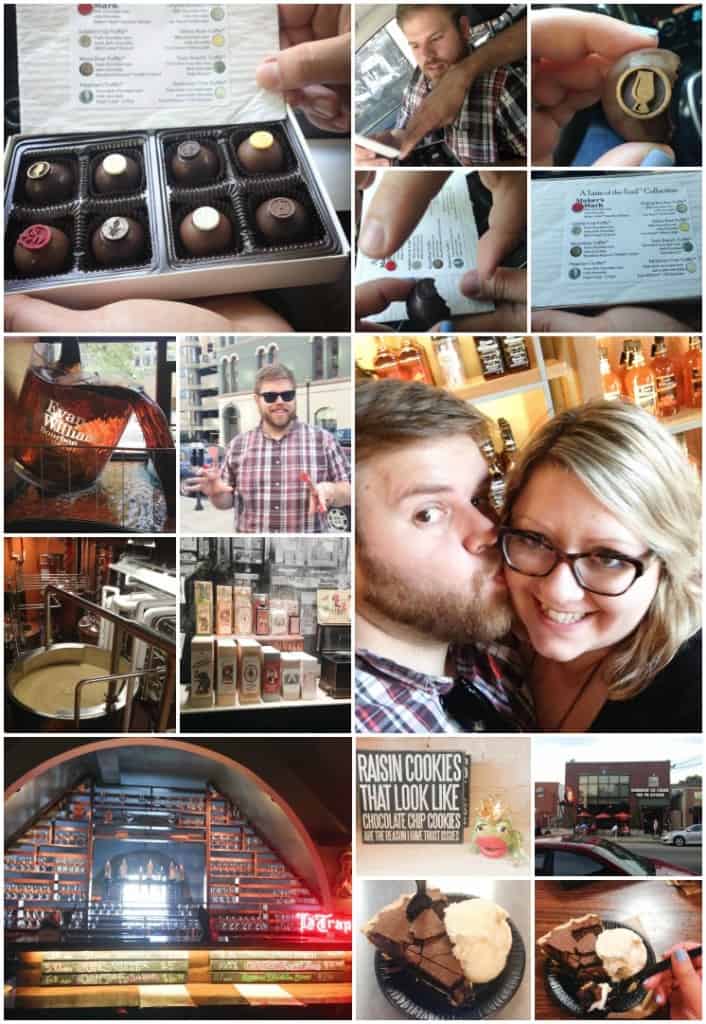 Then, on the way home, we just so happened to be driving by where my little sister lives in Indiana and so we stopped to say hi, and I discovered there was this gorgeous canal that one could walk by, and see little adorable ducklings!

Then, after a wonderful trip we made it home.

Have you ever been to Louisville? I’d definitely suggest a fun weekend away!