In honor of the Wisconsin vs. Duke Championship game I entered into a fun food themed bet. Cheese vs. BBQ, food synonymous with each region the teams are from is what the bet is for, a bet I can totally get behind. 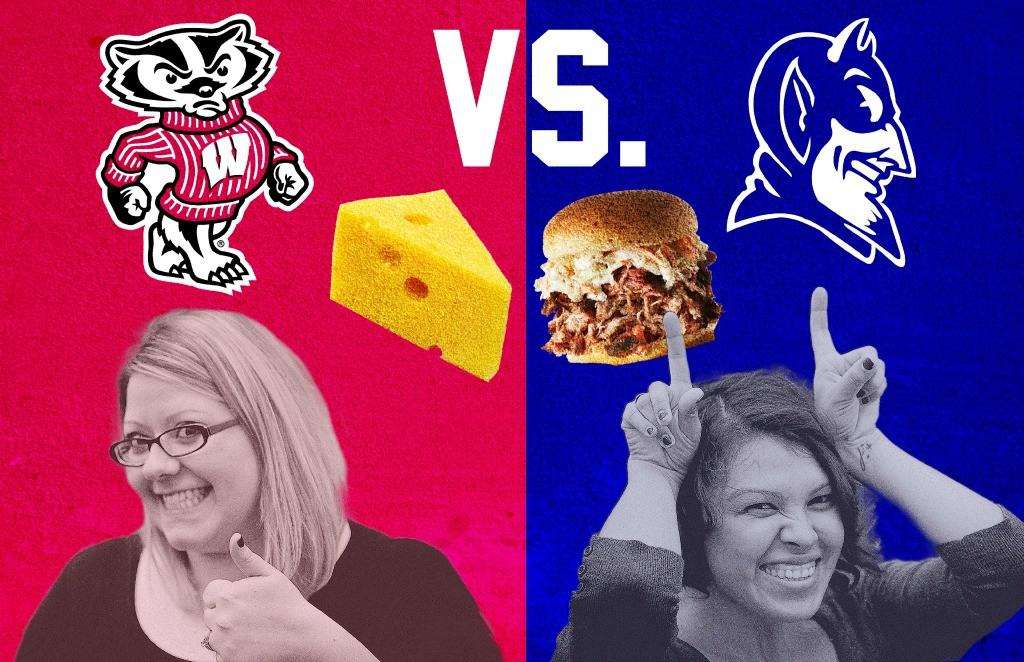 It all started with a funny text from my friend Janet:

Phi, in honor of the champion ship game tonight let’s make a deal! If Wisconsin wins you send me Wisconsin cheese and if Duke wins I’ll send ya NC BBQ!

It was then made official by her posting it on my SweetPhi blog facebook page.

Let me give a little bit of back story. I used to live in North Carolina. It was in North Carolina (I worked at UNC Healthcare, and there’s a big rivalry between UNC and Duke) that I pledged my allegiance to UNC. When I was in NC I met one of my besties, Charlotte. Charlotte is the talented photographer you’ve heard me mention a time or two (she took the beautiful pictures of the blue cheese bechamel mac and cheese and these hot chocolate cupcakes) and is the one who introduced me to photography as a whole…oh yeah, and she introduced me to Janet (haha, I kid, lots of love to Janet).

Fast forward a few years and I moved to WI where I met my amazing hubby who went to UW Madison. A few stolen hoodies and Tshirts later and I’m a Wisconsin fan.

So when Charlotte found out about the little bet I had going with Janet, she created the amazing graphic you see above. Isn’t she amazing?!? I mean she put that together in like a few seconds! GENIUS!

If WI wins (which, let’s face it, they will) I will enjoy some delicious BBQ sent to me by Janet. And if Duke wins (which they won’t) I will send Janet a box of WI cheese!

Which team are you rooting for?

UPDATE: The game was a nail biter, it was so close the entire game, but Duke won 🙁 I will be heading to the cheese shop and will be sending Janet Wisconsin cheese this evening.