I have been looking forward to sharing this post with you because it’s been so exciting and so many of you have been following our journey since I shared that we had put our house on the market last year. So today I’m sharing a little behind-the-scenes story of our new house and our move! 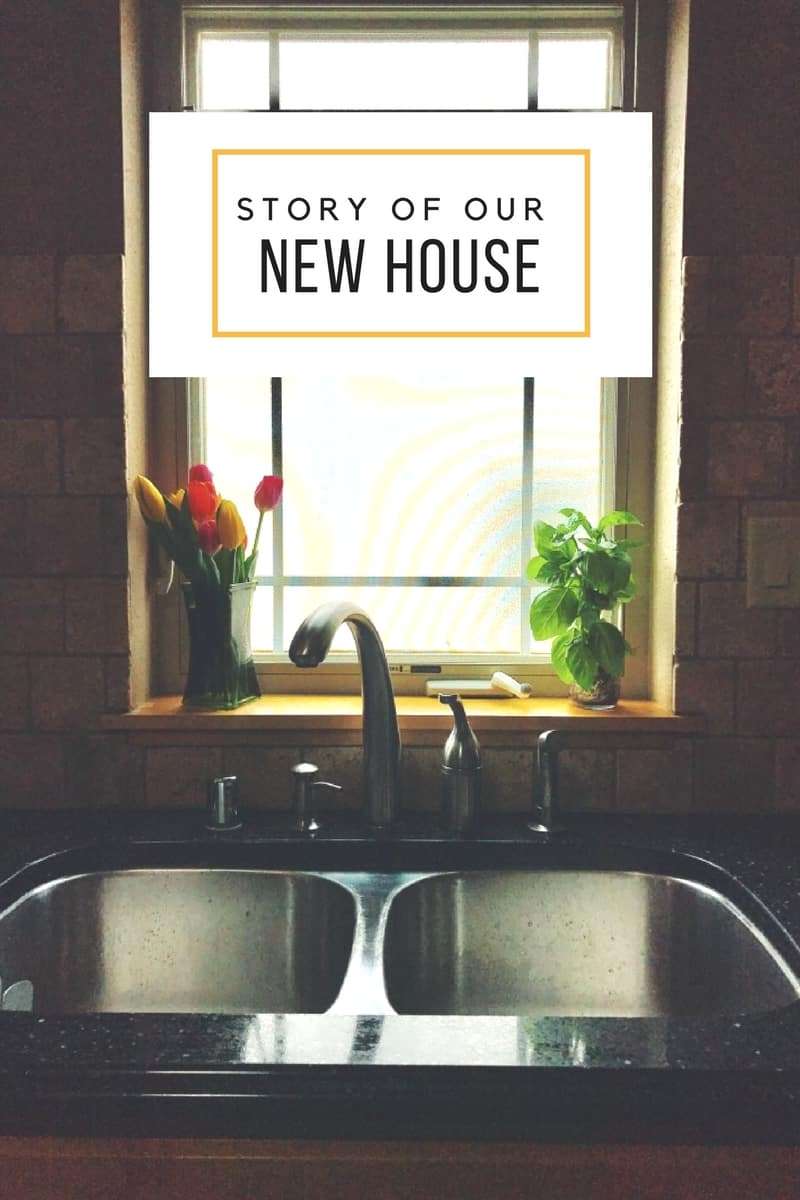 The way things worked out is truly amazing, oddly coincidental, and I’m still pinching myself and thanking the big man upstairs for everything falling into place the way it did.

You see, we put our house on the market last year. LAST YEAR!!!! We put it on the market a little too late I believe, just as buying season was tapering down (at least that’s what we kept telling ourselves). There were a few tours, our realtor did many open houses, but there just wasn’t any interest. 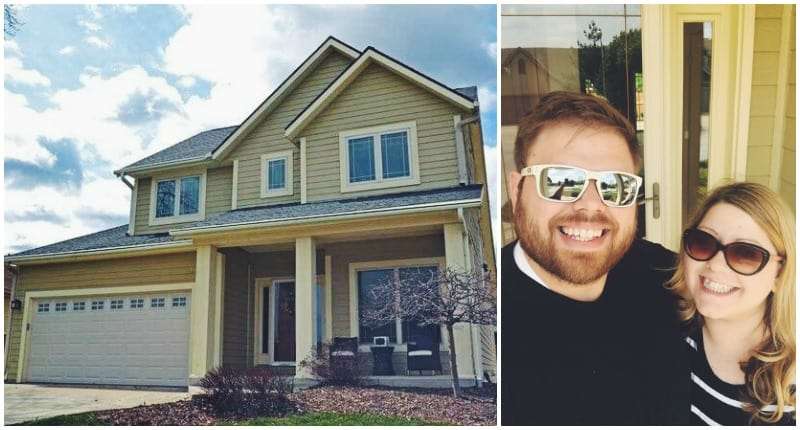 At that point, we had really been wanting to start a family, but nothing was happening. It was just the two of us and Clover (our dog) and while we WANTED to move, it wasn’t really a necessity. It was fine, just a smallerish house and hopes of moving before the holidays, so we rented a little storage unit and put all of our knickknacks and holiday decorations in storage.

Well, the months kept on rolling by, and nothing. It was very disheartening. Some of the reasons we were told our house wasn’t selling (makes sense, but still):

Then in the late fall, we found out I was pregnant!!!!!! So exciting. Truly amazing. Even at 36 weeks (8 months) I am so grateful to be pregnant (although the pregnancy wasn’t the easiest at first, I was literally sick every day for a solid 3+ months, now it’s so much better).

With all the holiday stuff going on and seemingly no activity or interest on the house, we decided to take it off the market over the holidays and relist it in the spring.

Over the holidays we didn’t have any decorations because everything was in storage. I bought this little twig and light tree that I thought would be ‘simple & classy’ but it was just sad lol.

The March rolled around and we put our house on the market! This time around, there was lots of interest, YAY! There seemed to be a tour every other day and sometimes multiple tours on weekends – but sadly no offers. We were constantly cleaning our house because of the tours and making arrangements to go over to my in-laws with Clover. Thank goodness they live close by and are so nice, because it would have basically been impossible without them.

Keep in mind, I am 5-6 months pregnant at this point and starting to freak out a little. The way our house was set up, the master bedroom was upstairs and the 1 bathroom was downstairs, so I’d be going up and down the stairs at all hours of the night to pee the bazillion times one has to while preggo. It would wake me up, and then I wouldn’t be able to go back to sleep and make for one cranky Phi. 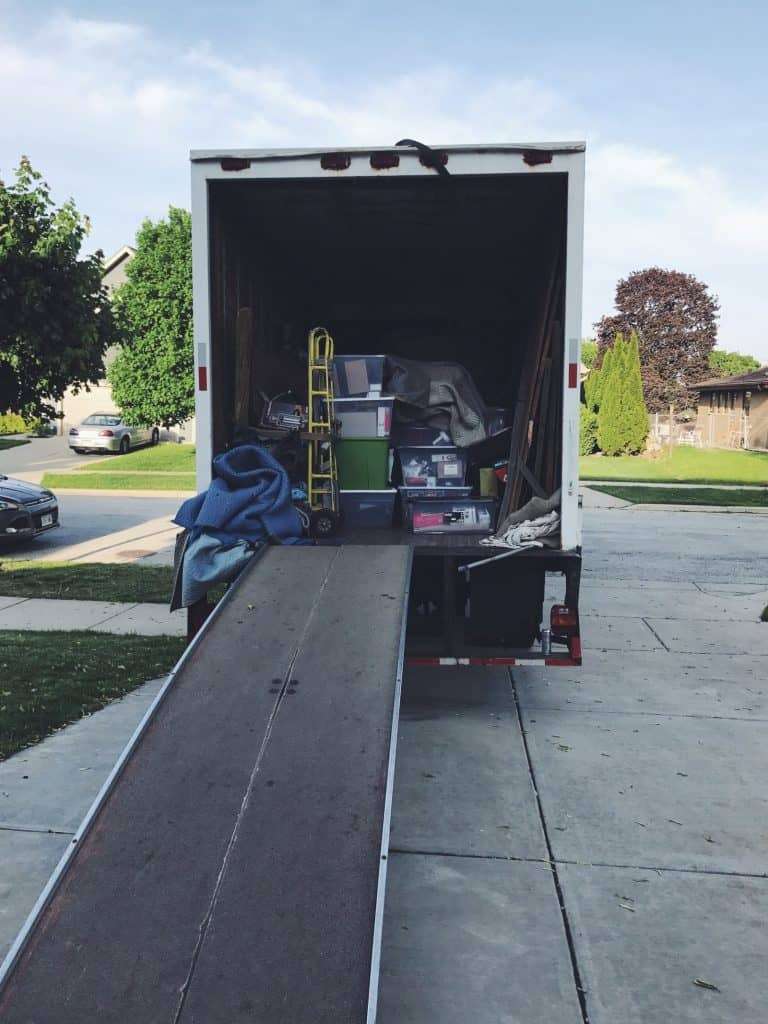 Also, I was beginning to get a little anxious (ok fine, maybe a little more than ‘a little’) about where we would put the baby and baby stuff. We literally had nothing for the baby and I didn’t want to buy stuff because we wanted to MOVE! I wanted to NEST (<- it’s a real thing, I wanted to make a baby room and kept freaking out that the baby was going to be kept in a dresser drawer because we wouldn’t have anything ready).

Then, FINALLY, after one tour we got an offer, and after a few days because nothing is easy when selling or buying a house, we had an accepted offer. Then came the always nerve wracking inspection, appraisal, and paperwork.

With the closing date coming up in a month on our current living space, we now were going to look for a house. Previously we had been looking online, but not in person, because in the areas we wanted to move, the houses would sell so fast that our little hopes kept getting crushed. 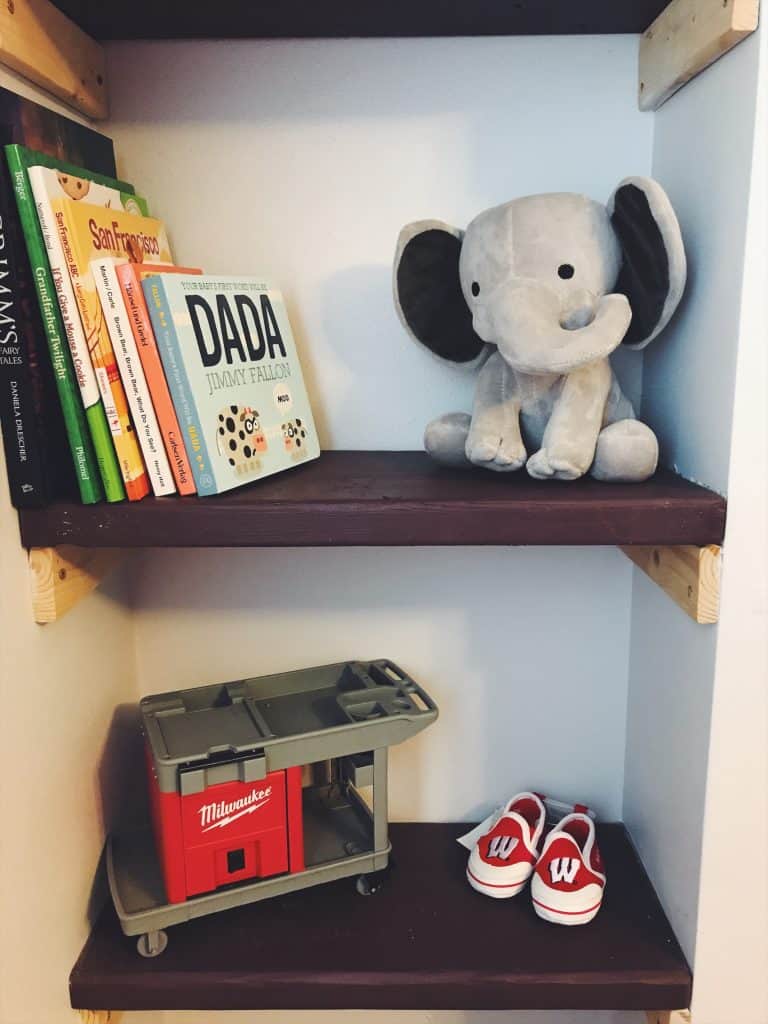 We figured we’d start by going to some open houses. And we proceeded to hate everything we looked at in person. Either it was in the right neighborhood but needed a ton of work (now I was 7 months pregnant and the thought of a bunch of renovations did not sound appealing) or it was not quite in the right area and ok, but we felt like it was just a little too much money.

We had just come back from an open house and were feeling hopeless and defeated and went over to my in-laws and were sitting at their kitchen table lamenting the ugly houses we had seen, and my father-in-law was looking at houses on his phone, and he was like “what about this one?” It was amazing looking. We drove by it and immediately asked our realtor to set up a tour.

This was on a Saturday, the house had literally JUST been posted that day. We toured it on a Monday, loved it and put in an offer that evening.It just felt like ‘home’. During the tour I remember a moment when I was standing in the kitchen and just felt like it was ours/mine. I was thinking “these people need to get their stuff out of my house” lol. 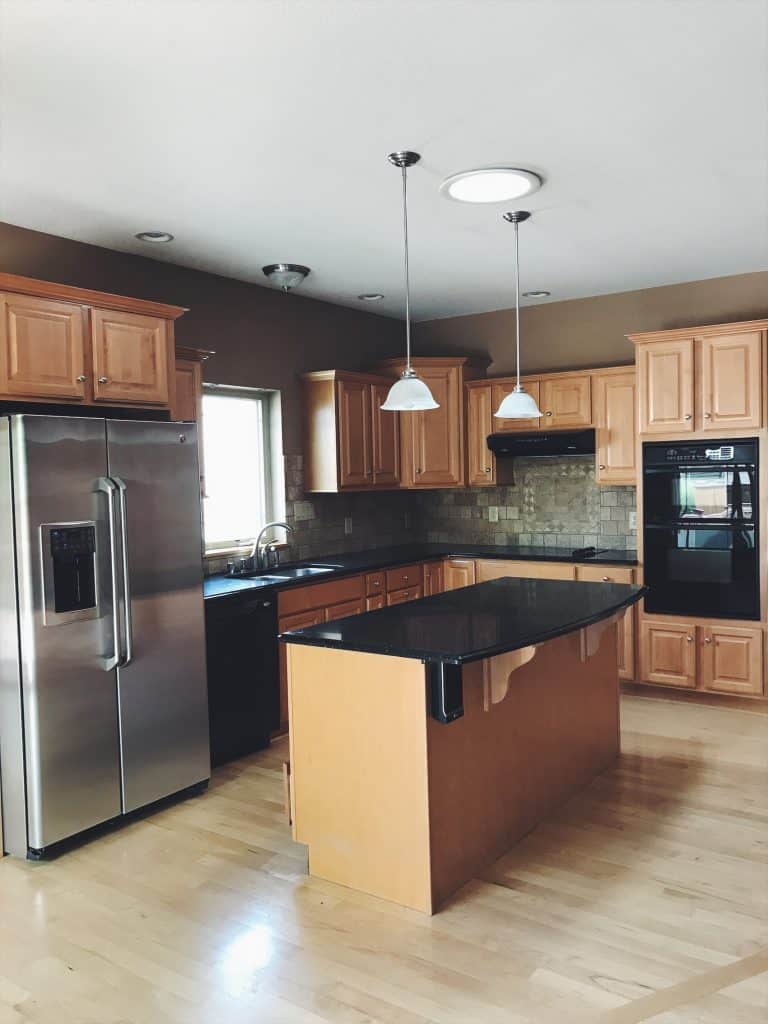 Miraculously closing dates worked out so that we closed on our new house, and then 2 days later on our old house.

A little about our new house: it is our dream house and our (hopefully) forever house. If you think of the letter “L” our old house was located at the very top, and my in-laws were at the bottom end of the L. Our new house is now where the two lines meet. So it’s about a mile and a half away from my in-laws and close to an on-ramp for me. Perfect for me to drop off the baby when he’s born and then go on to work.

The house itself is beyond amazing. It’s like everything we had on our list (even as things we’d ‘like to have’ but not ‘musts’) is fulfilled. It’s open and perfect for entertaining and I cannot wait to have people over. And I’m seriously in love with the kitchen – a must for a SweetPhi kitchen, right? 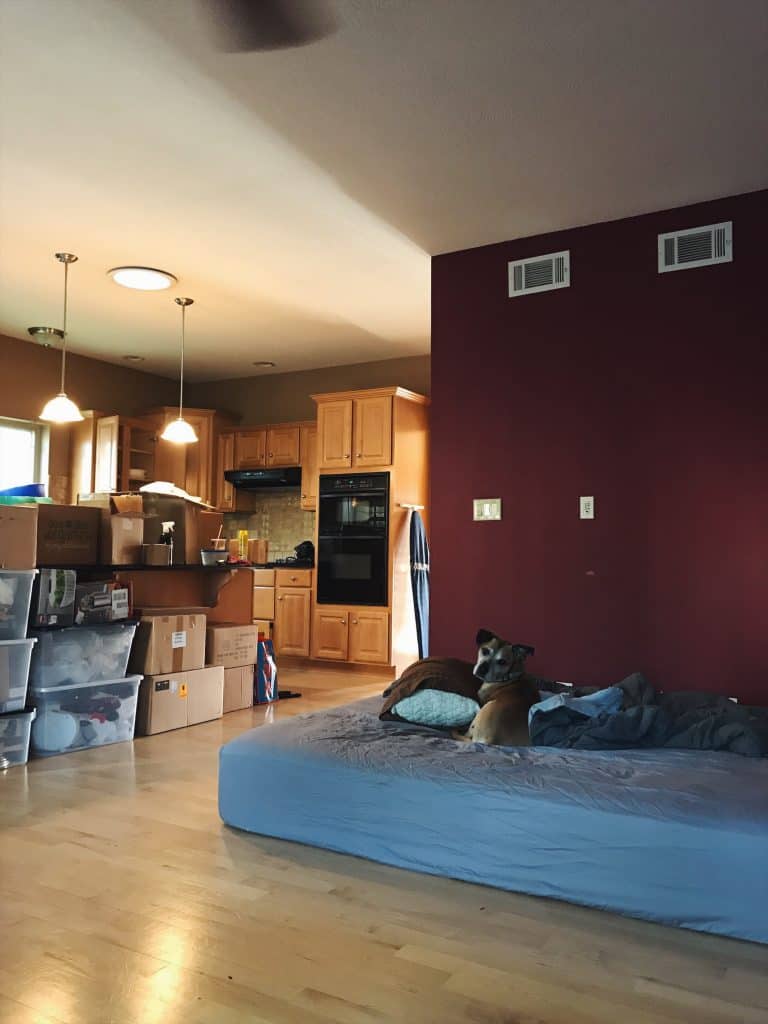 The move went well – only a few small hiccups along the way, like the fact that our bed frame had been put together wrong initially, so my husband had to use a saw to cut the support boards down, which resulted in us sleeping on a mattress in the living room until that was done lol, but Clover kept a watchful eye on us.

My amazing hubby even broke down the boxes, it was so cute and organized lol. 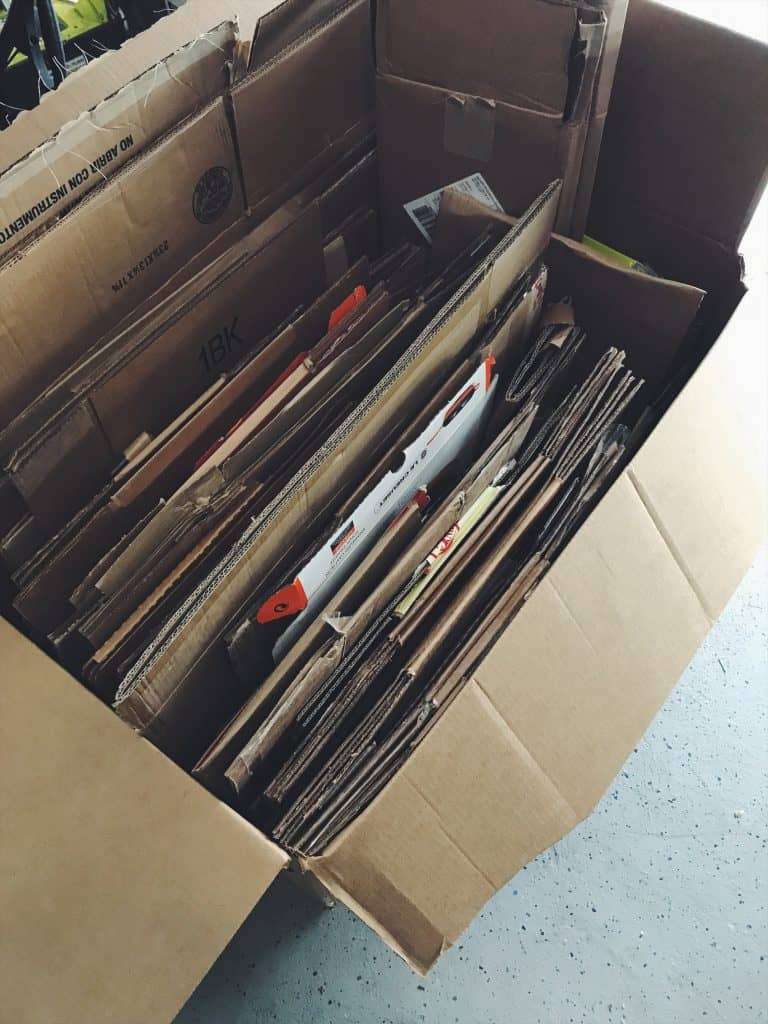 I will share more photos- a home tour if you will – when we unpack a little and get things set up. If you’re still reading at this point, thank you – I know this is a long post, it is all my excitement over our new house that I just couldn’t help sharing!!!!