When you have to do something really hard as a parent, this is such a hard post to write, I tear up just thinking about it. Recently, we had to do something very hard as parents. We made the decision to give our dog, Clover, up for adoption. 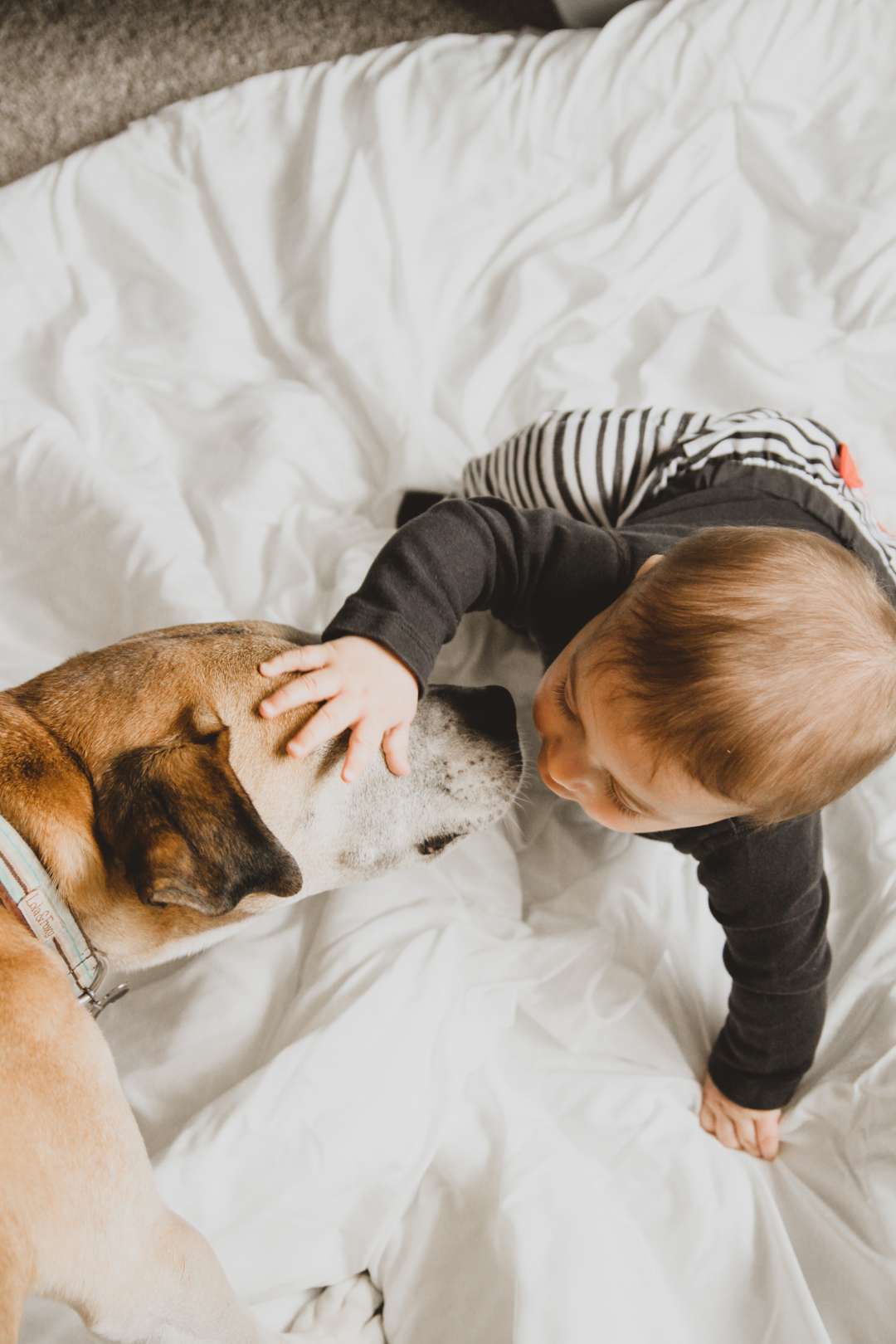 If I were writing this pen-and-paper style, you’d see ink smudges from tears.

It’s now been over a month since we had to give up our dog, and I’ve been holding on to the grief. It’s the right time to share, because I know it was the right decision. It’s just taken me a moment to process it because she was such a huge part of my (and our) lives.

When I rescued Clover (a decade ago) she couldn’t even walk, and she was terrified of everything. I took her to special trainers and over time she became the best dog ever – she loved hiking and cuddles! She made the move with me from North Carolina to Wisconsin. 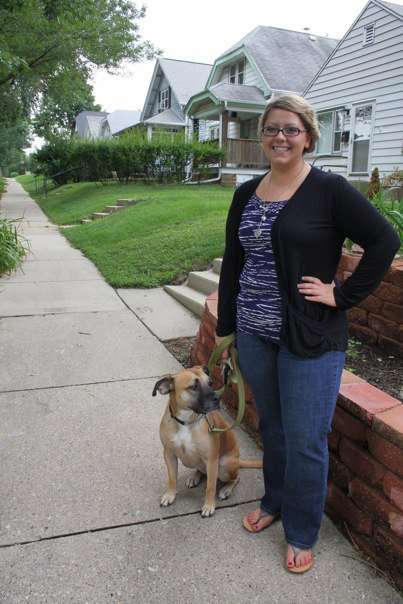 She was my #1 and we’d take daily walks and discovered Milwaukee together. She met Nick when I did and won him over. I’m convinced that she liked him just a little bit more than me. She’d cuddle up against him so hard she’d sometimes push him off the couch or bed. We took many trips with her, she loved riding in the car. 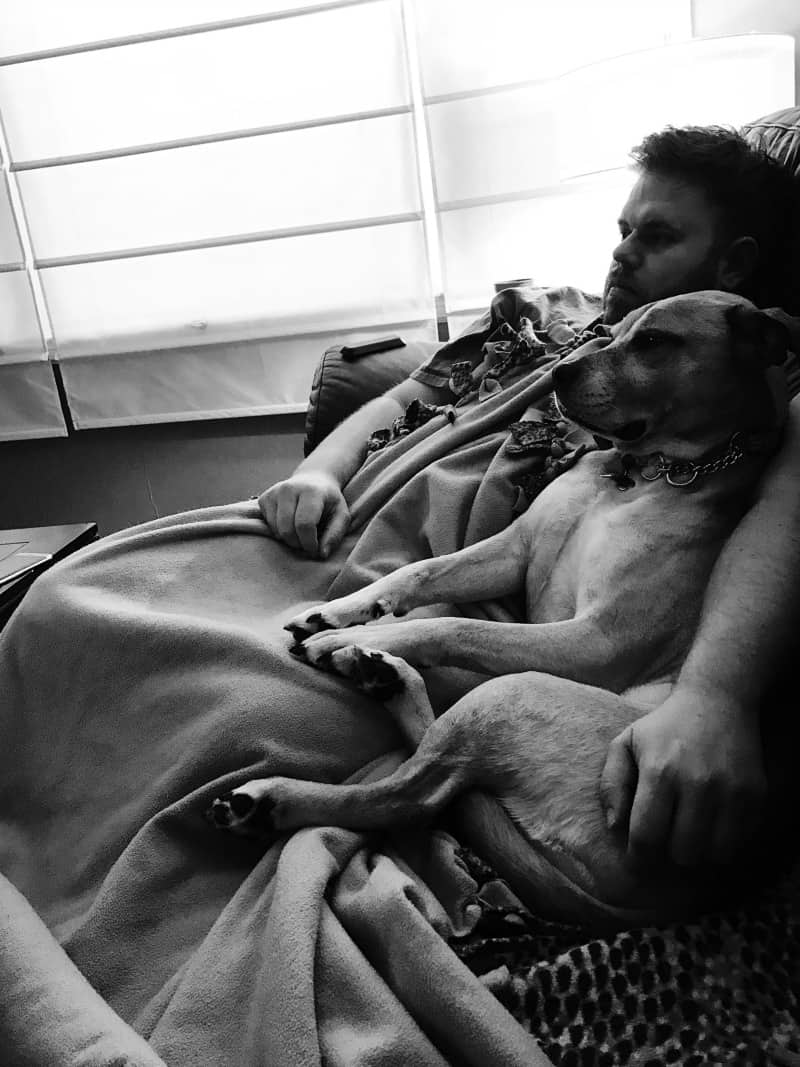 But around loud noises (like fireworks) Clover would always freak out. She’d drool and shake uncontrollably and be super anxious, it was horrible to watch. So whenever I hear a firework, I immediately think of her. We took a trip with her and a friend once over the 4th of July weekend, and we couldn’t even leave the house we rented because she was having so many issues. But other than loud sounds, we thought she was the best dog ever. She’d only bark once or twice loudly when the doorbell rang, other than that she was quiet and mild mannered.

When we announced our pregnancy she was part of the picture.

When we brought baby Ben home from the hospital, it was the sweetest thing ever. She laid down on the floor and was super gentle around him. She had always been super good with kids, so we didn’t think there would be any problems at all. 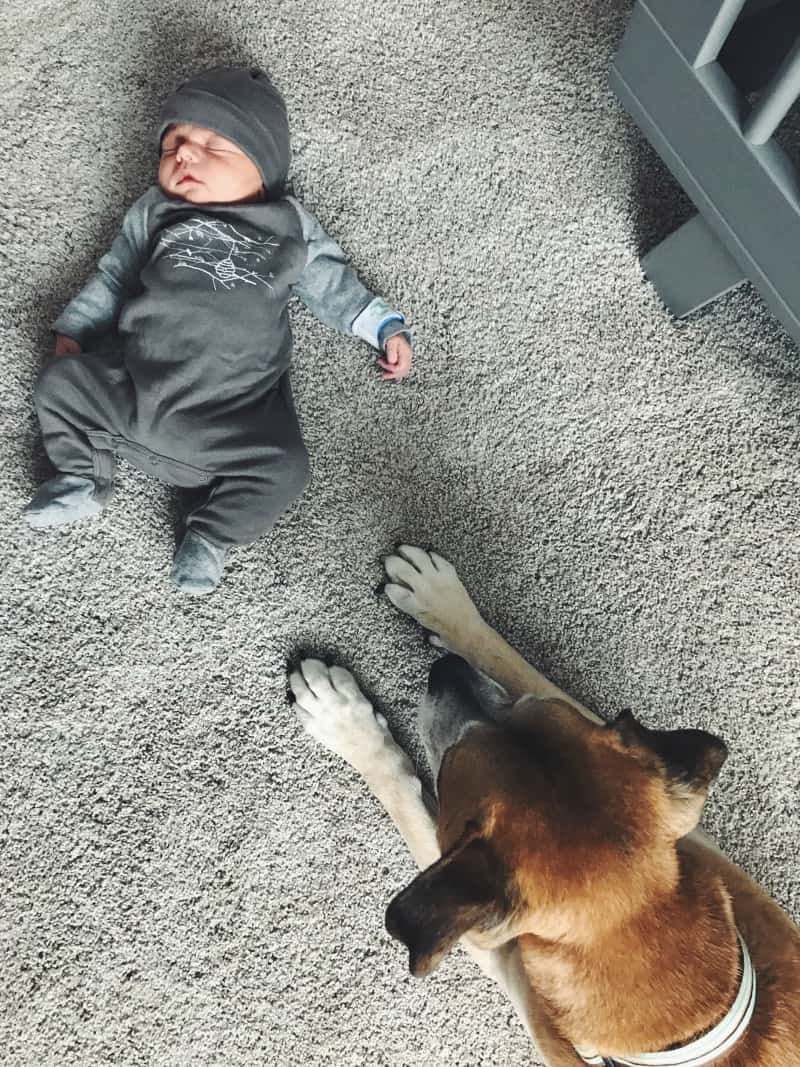 It all changed when Ben began to walk.

One day, unprovoked, she snapped at him really bad. She lunged at him and let out a toothy snarl and thankfully that was all that happened. But again, it was unprovoked.

So we separated them.

But she would get super anxious at being separated and we’d come home to blood on the landing and carpet from her trying to get out. We tried keeping her confined to a room, but she would ‘nest’ and ruin the comforter and mattress. We took her to a trainer who said that unfortunately/fortunately she was very well trained, so there wasn’t really anything they could do, and that it was unfortunately common when babies start walking that they get confused as elderly dogs, and that we should just separate them (obviously with her hurting herself this was becoming increasingly difficult). We took her to the vet and they didn’t want to give her medication because they said they have seen medication lower the inhibition of the dog and then the dog could actually bite. 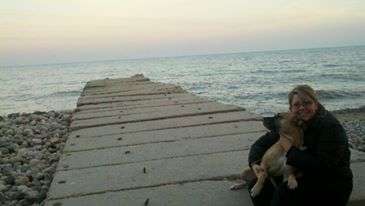 Whenever Ben was around, she would shake and drool uncontrollably like with fireworks. She would ‘paw’ at us, and she wasn’t a small dog, so this really hurt! As soon as Ben wasn’t around, she was her calm fine happy cuddly self.

And it wasn’t just keeping Ben in a different room from her. Literally, as soon as we’d take him out of the house, she would almost breathe a sigh of relief and be herself again. 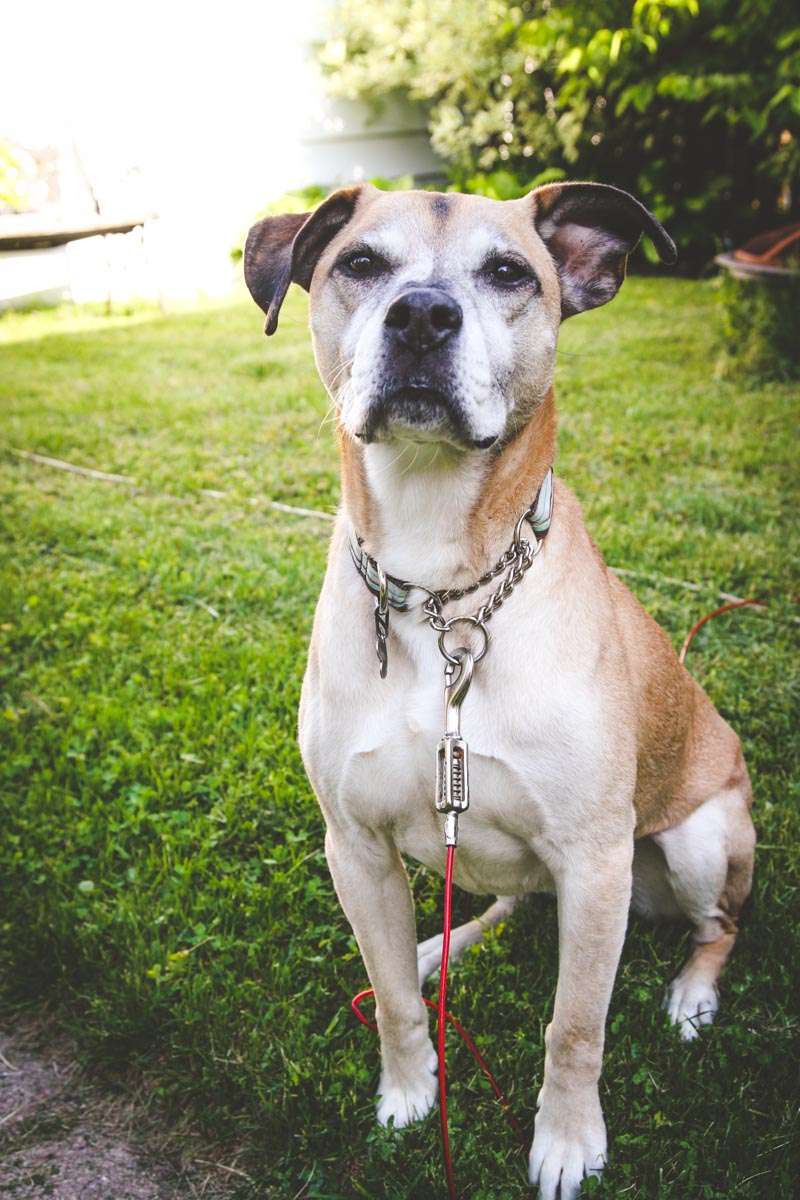 We knew it was not a healthy situation for her, so we made the difficult decision to give her up for adoption. The process could not have been better, and it made me feel better to know there was a waiting list of people waiting to adopt dogs. We were even happier to see that she had been adopted within 4 days of giving her up.

I know it was ultimately the right choice, because I could not have lived with the fact that I saw her snap and did nothing and then God forbid something horrible did happen, and you have to do and make really hard decisions as a parent, but man, it’s tough!

Every time the doorbell rings, I miss Clover’s one or two loud barks, letting us know someone is there.

I miss the snuggles and kisses.

I miss our daily walks.

I miss saying “Clover!” in a joking way and blaming things (like if someone in the house passes wind lol) on the dog.

I miss that sense of security I felt walking with her, she would mean mug people but really was the sweetest dog. 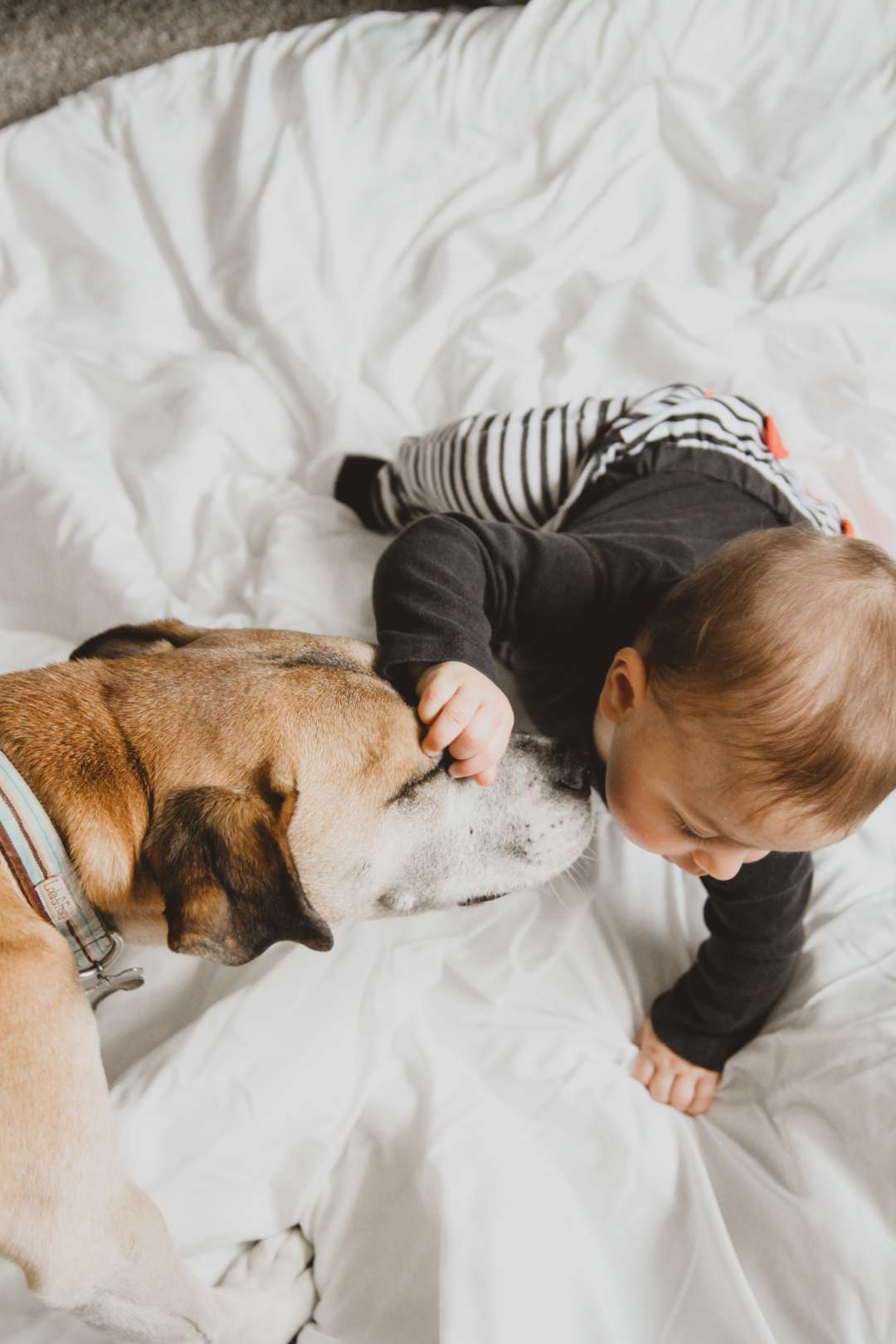